Send the TC, CVA, OR Henry BARREL ONLY, and $125 check or money order, total including UPS shipping.

$150  if you take the simple route leaving the  Henry forend on,

(This for the extra handling and care packaging to protect the wood finish.)

All prices quoted include UPS shipping.

Add $25 to mill/convert the extractor for the  rebated rimless .350 Legend case rim.

Rechambering to bottle neck cartridges with additional for handling and converting extractor for rimless cases, from $205.

Custom barrels made by the best of the custom TC barrel manufacturers!

Buy in stock Contender and Encore barrels  for immediate shipment or have them custom build your barrel in 4-6 weeks!

No one else offers the wide range of options, steel picatinny rails, and barrel fluting that MGM does.

Order your barrel directly from Match Grade Machine, made however you want with their standard chamber or for $125 additional post paid to you,  custom chambered by me, Mike Bellm, to my specs for best accuracy with the full range of bullet weights and types.

Which chamber to choose?  It is a tough call since their  chamber work and mine are so, so close to the same.

MGM's .357 Maximum chamber has an excellent .358" diameter cylindrical throat, stepped down to .357"  far, far superior to factory forcing cone chambers, and very similar to my throating.   MGM's chamber is perfect for the vast majority of hunters and target shooters!

For the more meticulous shooters and those who like to experiment with the widest variety of bullet types.... .358" jacketed, .357" jacketed, and cast lead bullets, just ask them to send the barrel to me to chamber for $105 post paid to you, billed separately by me.  I take the time to dial in bores, do all throating separately for the best co-axial alignment of the throat with the bore,  and cut a few tenths of a thousandth tighter throat.

MGM's chamber or mine?

Either will give hunting accuracy better than a big percentage of "varmint rifles!"

The Henry Single Shot is one VERY nice little rifle!

Send your barrel or barrel with forend attached for chamber work.

You now have at least 3 chamber choices:

The goals of the 3 options are to:

The option for a MAG chamber lets you load  published .357 MAXimum loads in the MAGnum case:

Henry wisely chose the old, original closed breech barrel chamber with a very short forcing cone, as opposed to the current overly long forcing cone chamber that is essentially the same as a "shot out" barrel used by nearly all other manfacturers.

This permits me to throat the MAGnum barrel with a proper  minimum diameter cylindrical throat that:

Given a long minimum diameter throat, a MAGnum gives better accuracy with standard MAG ammo for those wanting to shoot .357 MAGnum and .38 Special loads while also being able to essentially duplicating .350 Legend factory loadings.

The MAGnum case with the bullet seated out holds exactly the same charge weights as factory .350 Legend ammo, 21 to 23 gr.!

Everyone asks if  they can shoot MAGnums in the .357 MAXimum chamber;  however, with the .3" long jump before the bullet even gets to the throat, you can't expect great accuracy.  If you want to shoot .357 Magnum and .38 Special ammo, just long throat the factory chamber!

Wrap your brain around this!

Choose to either optimize the MAGnum chamber or go all the way to the .357 MAXimum or .350 Legend chamber.

Refer to pricing in the first column.

If you choose to remove the forend, contact me first so  you don't lose parts removing the forend! 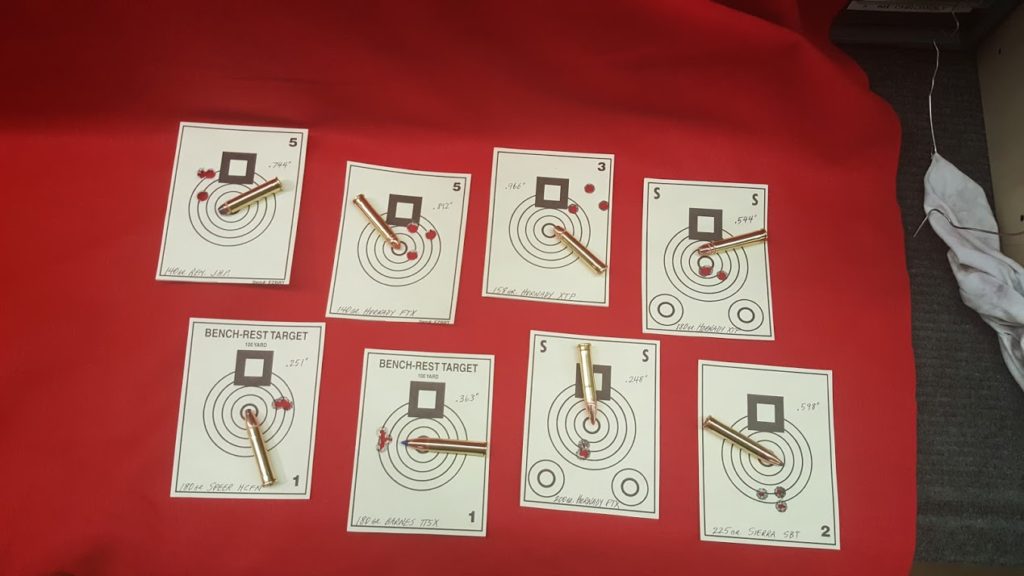 Superlative accuracy from MGM 1-20 twist rifle barrel shot at 80 yards. Note the 1/4" groups with .358" bullets in their .358" cylindrical throat and only slightly larger groups with .357" bullets

.357 Remington Maximum beats many of the traditional factory loaded "deer cartridges" such as .30/30 Winchester and .35 Remington.

.357 Remington Maximum is one potent game harvesting machine with more energy potential than factory .30/30 Winchester and .35 Remington, roughly equal to factory .300 Savage, and not far behind .308 Winchester energy levels, but with much less powder, less muzzle blast, and less recoil!

Perfect for those states with straight wall case limits and/or overall cartridge case length limits where in most cases the .45 cal. rounds border on simply dumb when the .357 Maximum is so much more accurate and easier to shoot accurately with its moderate recoil.

.357 Maximum is a perfect starter gun for kids to learn and grow on.  It is easy to load moderately for closer range shots and lighter recoil.  Its moderate recoil makes it perfect for smallish folks such as the ladies and folks with disabilities who simply can not stand the recoil of the various .45's.

.357 Maximum when loaded down in a rifle length barrel is almost like shooting an air rifle.  But stoke it up and hear that little dog bark like a big dog!

Hornady XTP 158 gr. and especially their 180 gr. bullets have proven to be the best of the revolver type bullets for all applications..... handgun and rifle. Other brands and types of lead core handgun bullets tend to blow up and not penetrate into vital organs when driven at rifle velocities close in.

Lil Gun starting at 26 grains and worked up to as much as 30 grains gives top velocities in 24” barrels and good velocities in shorter barrels. Lil Gun is proving to be one of the very best powders for maximum performance in any barrel length, while AA-1680 is still gaining a little more speed per inch in 24” barrels.  Both are top performers.

IMPORTANT NOTE:  THROAT LENGTHS IN CUSTOM BARRELS VARY.  THROATS SHORTER THAN MINE WILL INCREASE PRESSURES.  AS ALWAYS, START ABOUT 10% LOW AND WORK UP!  NEVER JAM BULLETS INTO THE RIFLINGS!  CHECK FOR EXCESS PROTRUSION OF THE CASE FROM THE END OF THE BARREL BEFORE FIRING!

Loads published in the major reloading manuals are pitifully understated, going to only go to about 40,000 psi.  SAAMI maximum is 48,000, and in the closed breech guns pressures can be run at the same levels as 5.56 NATO, about 54,000 psi.

My standard rule for maximum pressure that I have gone by for over 35 years is to take pressures to the point where a slight crater (ridge) begins to appear around the firing pin indent, then back off to just below that point.

Use only MAGNUM Rifle primers in .357 Maximum loads.

After the hunts are over is the best time to send barrels in for customizing!

Get your barrels customized early for next season!